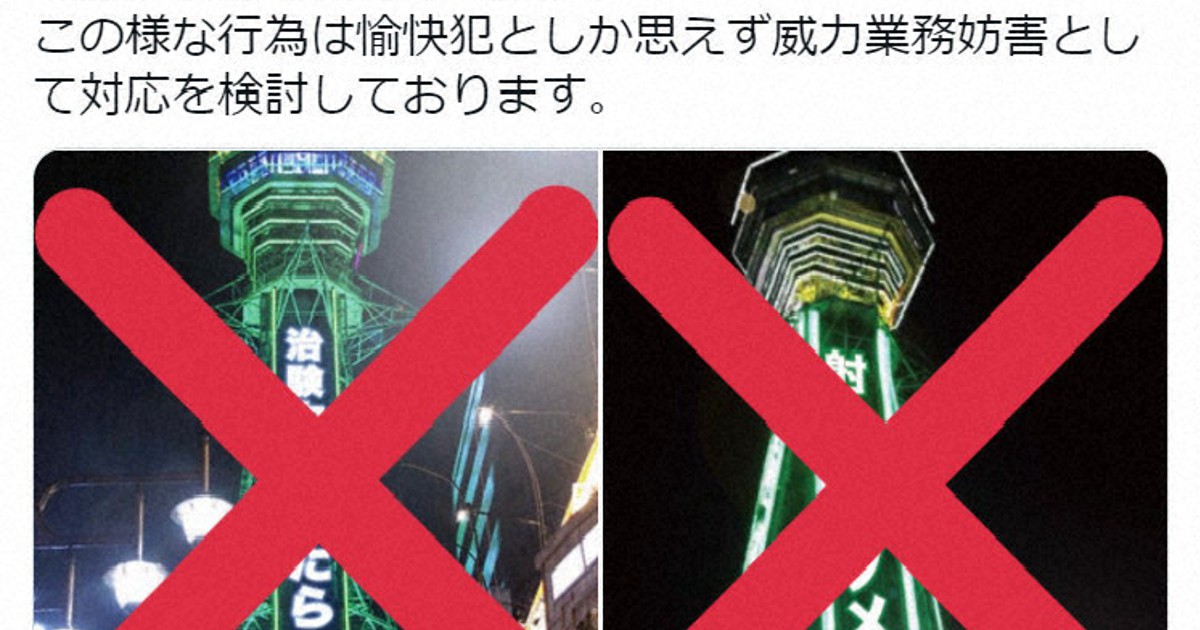 OSAKA – Fake photos of neon signs on Osaka’s iconic Tsutenkaku Tower that could be interpreted as discouraging people from getting the coronavirus shot have gone viral online, prompting the tower operator to warn people people spread images of “vicious rumors”.

According to President Takamitsu Takai, the seemingly photoshopped images began to spread on November 3 via Twitter and Instagram, sparking a flood of complaints from the company, such as, “Is your company really putting this ad?” And, “Prevent images from spreading if they are misinformation.” One person even asked, “How much does it cost to put up an (anti-vaccine) ad?” The company says its operations have been disrupted by the complaints.

Tsutenkaku Tower has been illuminated in red, yellow or green to reflect the current coronavirus alert level set by Osaka Prefecture. The tower had just gone green, the safest level, on October 25, for the first time in about a year and three months, after the infection disappeared in the prefecture.

â€œWe are finally seeing signs of recovery from the coronavirus crisis. The tourism and restaurant industries have been battered, and now is the time for all of Osaka to unite to overcome the crisis. This is not a problem that affects the Tsutenkaku Tower alone. Disinformation like these images is malicious and completely unacceptable, â€Takai said.

If the spread of fake advertising images does not decrease, the company has said it will consider legal action against the original poster and those who broadcast it.

“These images appear to have been rendered by a criminal for fun. We are considering responding to the case as a forced obstruction of business,” said the president of the company.

The founder of ASK-GARY links the story, the editorial; the school tax does not earn much