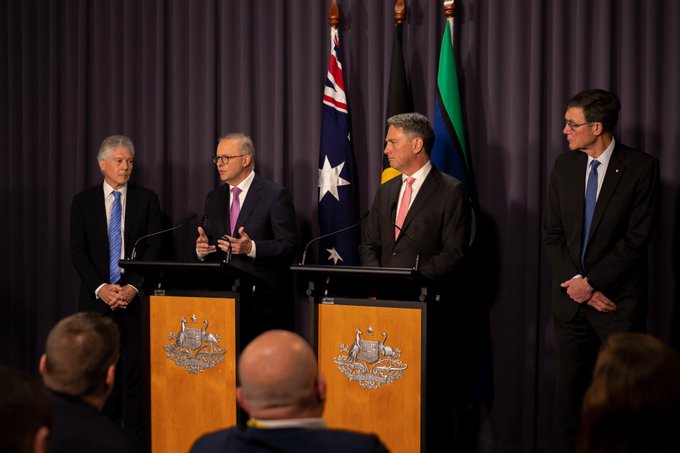 The Albanian government’s first budget since winning the election in May was not designed to focus on Australia’s security situation or defense spending. Tasked with sharing Australia’s difficult economic situation with the Australian public, the budget had more immediate fish to fry.

For Australians who wanted to see an increase in defense spending, it was not this budget as it would have directly undermined existing defense reviews due in a few months. Certainly, Prime Minister Anthony Albanese has said the government will do whatever is necessary to ensure Australia has the defense force it needs in these strategically uncertain times.

But, as I explain in the latest edition of ASPI’s defense budget brief, the October budget documents give no indication of how much the government is willing to spend on this. While the strategic defense review under Stephen Smith and Angus Houston is carrying out its work and is not due to report until March next year, the government is sticking to the funding line inherited from the March budget of his predecessor. It is an artifact of the 2016 Defense White Paper, a document drawn up in another era and quickly overtaken by events.

Defense is therefore on standby while the government keeps its powder dry and waits for Smith and Houston (noting that their interim report was recently delivered to the government). He no doubt had conversations with review officials indicating his comfort zone for additional spending, but that has not been made public.

What we can tell from the information in this budget is that any increase in defense spending will require a difficult reprioritization. Although the government has received a revenue windfall this year due to high commodity prices, these are expected to return to normal. And with the government pledging to deliver the tax cuts agreed to by its predecessor, its revenues are under further pressure. At the same time, he faces five mounting spending pressures: interest on the growing debt, the National Disability Insurance Scheme, health care, elderly care and defence, above all increasing the existing defense funding line. The result is a forecast of deficit spending for the next 10 years.

This is not a good situation for review officials. They are tasked with delivering new military acquisitions faster over the next decade, but the existing acquisition plan is likely already unaffordable (without increased spending), with many entirely new capabilities or costly replacement projects. And with nuclear-powered submarines and frigates on the untouchable list, the challenge of delivering sooner becomes even more difficult, as these two programs will consume tens of billions of dollars over the next decade before they even deliver their first ships.

On top of that, inflation is rapidly eroding Defense purchasing power by billions of dollars every year. By the end of the forward estimates, Defense could have lost about $18 billion in purchasing power, even if inflation quickly returns to the Reserve Bank of Australia’s target rate. These are the predictions of the budget documents, but these predictions have not been very accurate in recent years.

This year, despite nominal growth of more than 7% in defense spending, real growth is less than 1% once inflation is taken into account (although, inflation being difficult to predict, it is also difficult to reliably quantify actual growth). It is hard to imagine that Defense can afford its ambitious acquisition program with an essentially static budget in real terms.

Inflation is also driving nominal GDP growth at an expected rate of 8% this year. This means that defense spending is falling as a percentage of GDP for the second year in a row despite the government providing the funding forecast in the 2016 white paper and the 2020 update. Planned defense spending has also fallen significantly just since the March budget, rising from 2.11% to 1.96% of GDP, although the funding line remains basically unchanged.

In summary, there is no pot of gold available to cover increased defense spending. That’s not to say the government can’t or won’t increase defense spending, but any increase will require either higher taxes (which seems unlikely, since the government is continuing the tax cuts planned by its predecessor ), either more borrowing (accelerating the vicious cycle of debts and deficits) or cuts in other priorities that have their own clientele.

When we look at the three main areas of Defense spending—capital acquisitions, personnel, and sustainment—there have been no significant changes since the March budget. With the Australian dollar at a 20-year low against the US dollar, the defense budget has received a large automatic top-up to maintain purchases, but there are no adjustments to offset inflation.

There are some spending changes, but they are broadly in line with what we would see in a mid-year budget update. For those tracking capability, the top 30 acquisition projects and sustainment products contain some interesting information, but the lists are fairly consistent with previous plans. We will have to wait for the results of the strategic review to see anything new.

Similarly, there have been no adjustments to the Defense personnel allocation since March. But that still means the Australian Defense Force needs to find around 13,000 more people this decade to harness the capabilities of its shopping list, even though it has only managed to grow by an average of 300 a year since the white paper. of 2016. Smith and Houston may have to consider whether it makes sense to get abilities the ADF can’t equip, or at least how the ADF can maximize its combat power without a lot of extra people. Of course, another HR strategy is based on “If you build it, they will come”.

The situation is also difficult with civilian and external defense personnel. To carry out its ambitious capability program, Defense has relied on a growing number of subcontractors. They have helped Defense spend record sums on its acquisition programs in recent years, despite the impact of Covid-19; however, they come at a cost. This growth may be over; in the October budget, the government is seeking $144.6 million “in external labor savings and savings on advertising, travel and legal costs.” That’s not a large percentage of Defense’s total budget, but if it means the organization can’t hire the people it needs to run the acquisition program, it’s hard to see how Defense will provide more capacity sooner.

Overall, while there were no surprises, the budget didn’t make it easy for Smith and Houston.