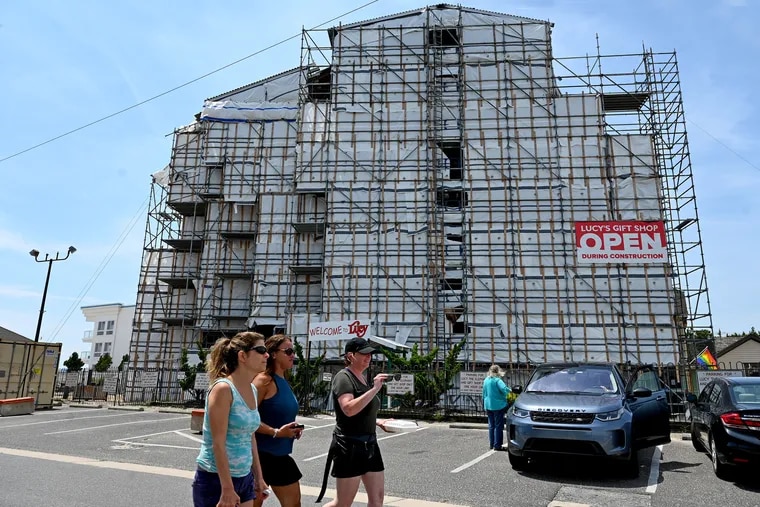 The post featured a photo of Lucy the elephant in 1973, when the attraction was threatened with demolition, alongside the phrase “Never forget, never again”.

Susan Klyman, a resident of Margate and Newtown, Bucks County, and a member of the Philadelphia-based Sons & Daughters of Holocaust Survivors, told The Inquirer on Tuesday that she was outraged by the sender. Sons & Daughters also objected as an organization, noting in a tweet that “words matter!”

On Sunday, the Save Lucy Committee board formally apologized for the use of language, which the board said was not intended to offend.

In a statement signed by Chair Davida Ross, the board said “we now fully understand that saving Lucy didn’t seem like the height of the use of that phrase, no matter how well intentioned.”

Richard D. Helfant, chief executive of the Save Lucy committee, said he sent a copy of the statement directly to Klyman on Sunday afternoon.

“I appreciate the apologies of the Save Lucy committee for the use of this language, the sacred language, the ‘Never again, never forget’ language – it is the sacred language of the Holocaust and, in a universal sense , other genocides,” Klyman said Sunday. Although Lucy is “an iconic and beloved landmark in Margate, she is not a living, breathing human that we keep this language for. But I really appreciate the apologies.

Helfant said the apology was intended to be a “general apology on behalf of the board” to the “general public, of which Ms Klyman is a member.”

“These are general apologies to anyone who may have been offended by [the original language]. It’s not like who or what the Save Lucy Committee is talking about, and I think the apology that was written was well written, and it says so,” he said.

Helfant said around 10,000 letters were initially sent. Any follow-up or future mail will not contain the offending language, he said. He said there were no plans to send out any mail specifically retracting the language. He cited the cost.

The line alluded to the 1970s era when “Lucy was minutes away from the wrecking ball, and we can’t ever let that happen again,” Helfant said. “In retrospect, it probably wasn’t the smartest phraseology to use, but there was no malice or ill will, of course.”

Lucy dates from 1881 and was once a hotel. She is currently surrounded by scaffolding as a $1.4 million restoration has now grown to around $2.2 million, leaving an estimated $800,000 shortfall for fundraising, said Helpful. About $1.2 million of the project is funded through grants, he said.

Klyman was extremely upset by the original fundraising letter.

In a letter she wrote in response at the time to board chairman Ross, Klyman said, “Using a phrase that represents the Holocaust and other genocides for fundraising unrelated to the Holocaust is both insensitive and demeaning to the catastrophic historical events of the Holocaust, a genocide where millions of people were massacred.

“I consider that to be a glaring problem,” Klyman said in an interview with The Inquirer on Tuesday. “The Lucy campaign uses the language of the Holocaust in a very cavalier way. They co-opt the language.

It was not language, she said, that should be used to refer to an elephant.

Klyman asked the committee to apologize for the language.

On Sunday, she said “my response to this was never intended to raise big issues or controversy.” On the contrary, she saw it as an “educational opportunity”.

It was a chance, she says, “to make sure people understand that those words matter. They should not be co-opted for fundraising.

The point, she says, “is that it’s the language of the Holocaust. And a language universally more linked to the genocide. So if there’s been an educational impact here, somehow, somewhere, especially for the Save Lucy committee, then I feel like we’ve made progress.

The full text of the apology from the Save Lucy committee:

“On behalf of the volunteer Save Lucy Committee Board of Directors, the Board of Directors would like to apologize for using the phrase ‘Never Forget Never Again’ in association with the rescue and repair of Lucy. We were certainly well-meaning and never meant to offend anyone. Although the words have been used in association not only with the Holocaust, but other tragic events such as 9/11, we now fully understand that saving Lucy didn’t seem up to the job of using that phrase, no matter how well-meaning Lucy is a symbol of joy and survival; she’s loved by millions. We’re working very hard to renew her for generations to come. as she turns 141. We all want her to represent equity, diversity, inclusion and goodwill for all.