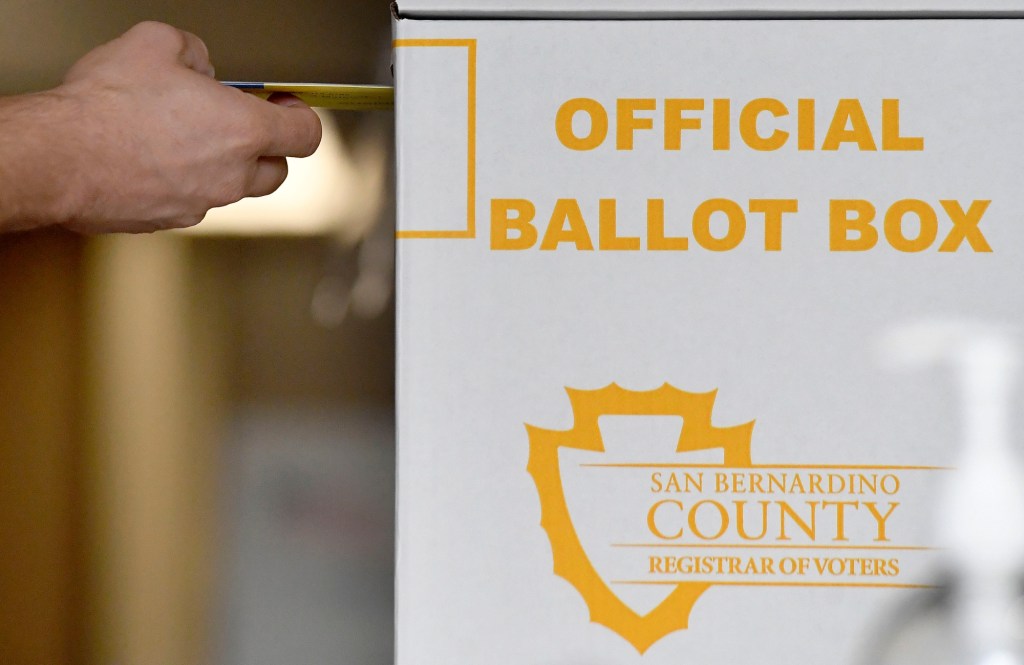 There’s more at stake than who goes to Washington in November.

In communities across the Inland Empire, voters will decide on November 8 who represents them in the House of Representatives and they will make their choices for local offices such as city councils and school boards. Many voters will also have decisions to make about local measures.

An advisory measure that would allow the San Bernardino County Board of Supervisors to investigate all options for getting a fair share of county resources, ‘up to and including secession’ from the state, is drawing attention , but voters in some communities will also decide to raise taxes, put caps on vacation rentals, approve a school bond and more.

Here is an overview of the selected measures for voters in Los Angeles, Riverside and San Bernardino counties:

Holiday rents: Measure O would cap the number of vacation rental licenses at 1,500 and limit owners to 30 vacation rental agreements per year. Currently, the city has about 2,600 vacation rental licenses, which under the measure would expire when a property is sold or transferred. The cap would prevent the city from approving new licenses until they fall below the 1,500 threshold. Under the measure, except for those already approved, businesses would be prohibited from obtaining licenses and no person or personal/family trust would be permitted to have more than one license. A simple majority is required to approve the measure.

Hotel tax: Measure P would increase the maximum transitional occupancy tax, or hotel tax, from 8% to 9% effective January 1, 2024 and from 9% to 10% effective January 1, 2025. The tax is payable by hotel operators. hosting companies. . The measure would give the city council the power to adjust the tax rate without voter approval as long as it does not exceed the maximum rate. The higher rates are expected to generate an additional $1.3 million annually in hotel tax revenue to support general city services. The measure passes with 50% of the votes, plus one vote.

Sales tax: Measure G Would increase sales tax by 1% to provide approximately $9.5 million annually to support the City’s general fund. Specifically, the additional revenue is intended to support services such as law enforcement patrols, 911 emergency response, and park and sidewalk maintenance. The measure passes with 50% of the votes, plus one vote.

Hotel tax: Measure M would introduce a transitional occupancy tax, or hotel tax, at a maximum rate of 10% of the rent collected by an operator of an accommodation business. The measure gives city council the power to set the rate by resolution, as long as it does not exceed the maximum rate approved by voters. Depending on the rate adopted by council, the tax is expected to generate revenue of $10,000 to $250,000 per year to support general city services. The measure passes with 50% of the votes, plus one vote.

Cannabis tax: Measure R would impose on commercial cannabis businesses a maximum of 7% of gross receipts for cultivation, laboratory testing, retail sales, distribution and manufacturing. Under the measure, the initial rate would be set at zero until cannabis businesses are allowed to operate legally in the city. If passed, the tax would generate about $3.5 million a year to support general city services. The measure passes with 50% of the votes, plus one vote.

Cannabis operations: Measure II, an advisory measure, seeks input from voters on whether the city should consider legalizing and licensing commercial cannabis businesses.

Sales tax: Measure Q would raise sales tax from 7.75% to 8.75%, generating approximately $95 million annually to be used for general city services such as police and fire, parks and recreation, local drinking water and initiatives to address homelessness and mental health issues. The measure passes with 50% of the votes, plus one vote.

Industrial tax: The measure would tax industrial properties 15 cents per square foot to generate up to $14 million a year to improve roads due to accelerating road damage caused by heavy truck trips. The measure passed with the approval of two-thirds of voters.

Warehouse tax: Measure J would increase the business license tax for distribution centers from 4.7 cents per square foot of gross area to 10.5 cents per square foot, generating an additional $530,000 per year to cover the costs of providing services municipalities and supplement the city’s general fund. The measure requires a simple majority to pass.

Transit villages: Measure F would amend the general town plan to include specifications on building heights in various developments planned along the upcoming Redlands passenger rail line. The measure would, among other things, limit the height of buildings near downtown and university train stations to three stories, and limit buildings near train stations in Alabama, California and New York to four floors.

Secession/Equitable Sharing: Measure EE, an advisory measure, asks voters if they want the Board of Overseers to consider and advocate for “all options” to get the county’s “fair share” of funding from the state, “until to and including secession from the State of California.”

Supervisor compensation/time limits: Measure D would reset term limits, cap supervisors at three four-year terms, and raise the salary cap for supervisors to about $180,000 a year. The measure would replace Measure K, approved by voters in 2020, which limited supervisors to a single four-year term and capped their salaries at $60,000. The new measure would change the threshold for submitting a tax measure to voters, requiring a four-fifths vote of council to return a tax. Currently, only a three-fifths vote of council is required to return a tax measure. Measure D is accepted with 50% of the votes, plus one vote.

Sales tax: Measure L would increase sales tax from 7.75% to 8.75% to generate an additional $16 million annually to support general city services such as public safety, roads and infrastructure, parks and homelessness efforts. The measure passes with 50% of the votes, plus one vote.

HD 45 Rumbles To Show Which Republican Could Represent Disney