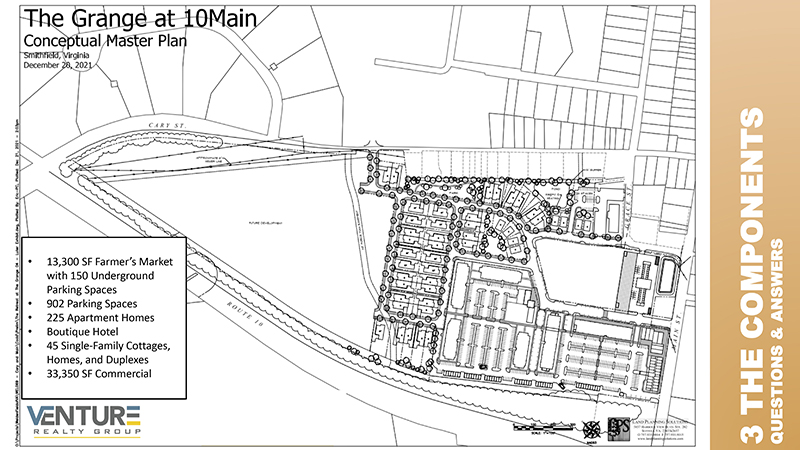 Smithfield City Council and the Isle of Wight County Supervisory Board met jointly at the Smithfield Center on December 22 to receive their first official look at plans from former Smithfield Foods President Joseph W. Luter III , aimed at redeveloping the former properties of Pierceville and Little’s Supermarket.

Luter bought and razed the former Main Street grocery store and the 1730s farmhouse at 502 Grace St. in 2020, proposing to turn the 50+ acres into a mixed-use development.

According to the plans presented, the first $ 100 million phase of the new development – which will be called “Grange at 10Main” – will include a 13,300 square foot indoor / outdoor farmer’s market with 150 underground parking spaces, 902 parking spaces. additional above ground, 225 apartments, a hotel, 45 single family and duplex homes and 33,350 square feet of commercial space.

The hotel and farmers market would both be located along Main Street, with access roads connecting the development to Main, Grace and Cary streets. The apartment buildings would consist of three and four storey elevations.

Luter and his son, Joseph Luter IV, have partnered with Venture Realty Group, architectural firm Cox, Kliewer & Co. and property management firm Drucker + Falk to make the proposed development a reality. According to Venture’s presentation, the first phase of the development is expected to bring in more than $ 933,000 in annual tax revenue for the Town of Smithfield and $ 1.1 million in additional annual tax revenue for the County of the Isle of Wight.

It is also expected to have an economic impact of over $ 37 million on the city and over $ 48 million on the county over a 30-year period assuming 2% annual growth – and creating over 60 new jobs.

The Luter family and Venture have offered to make a $ 1 million cash contribution to the Smithfield Farmers Market, plus an additional $ 1 million land contribution for green spaces and the Farmers Market, and to create an adjacent public parking lot. to the Christian Outreach program building valued at $ 700,000. . In return, they are seeking city and county public-private participation agreements for an infrastructure master plan and the hotel, and $ 6 million for the construction of the farmers market building.

According to city manager Michael Stallings, there is currently no set date for the matter to go to the town planning commission or city council.

The Smithfield Planning Commission was already planning to hold a public hearing in January on a proposed change to the city’s zoning ordinance that would allow the existence of mixed-use developments like the Barn.

City staff had informed commissioners in December that the zoning designation “planned head office and research district” specified in section 3.J2 of the city ordinance is not assigned to any parcels within the city. within the city borders, and no developer is seeking this particular zoning. designation. As such, they propose replacing the PCOR zoning option with an option that would allow planned mixed-use development, or PMUD.

A draft of the proposed changes to the ordinance indicates that the new zoning option would allow attached and detached single-family dwellings, multi-family dwellings, bed and breakfasts, retail stores and other uses to coexist on a single parcel , provided the lot is at least 5 acres.

The types of businesses listed would be legal uses, meaning that no approval from the planning commission or city council would be required for a developer to pursue those uses once a parcel is rezoned with it. success in PMUD. However, some uses, such as schools, churches, and accessory apartments within residential housing, would still require special use permits.

The public hearing on the changes to the ordinance is scheduled for January 11 at the regular meeting of the Planning Commission. The meeting will begin at 6:30 p.m. at the Smithfield Center at 220 N. Church St.

If the proposed changes to the ordinance were approved, Luter would still need to request that his land be rezoned to PMUD, which would require him to present his development plans to the Planning Commission and possibly Smithfield City Council for discussion. .