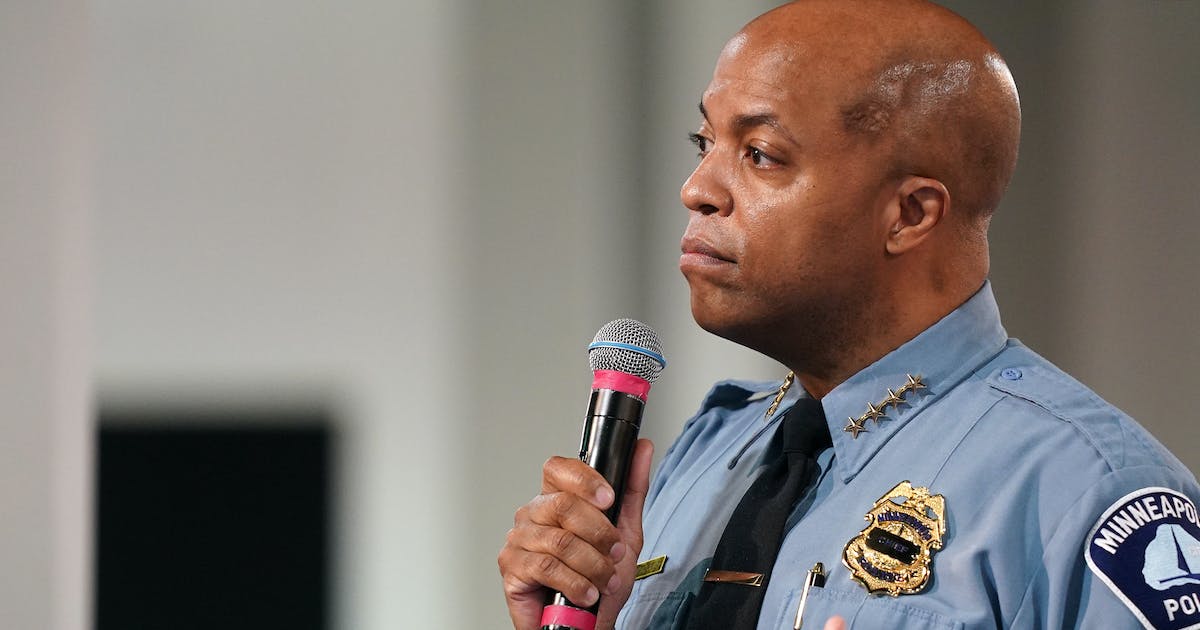 Retired Minneapolis Police Chief Medaria Arradondo has skillfully served the citizens of Minneapolis for 32 years, longer than elected Council member Robin Wonsley Worlobah (“With the chief leaving, real reform must return.” , Opinion Exchange, December 8). The chef will be missed, but I’m sure he’ll never fail to deal with people like Wonsley Worlobah and others who think and act like her.

Today’s politics on both the far right and the far left have evolved into expressing grievances and apologizing for their own failures using personal slurs. Case in point. Rather than accept that Minneapolis voters strongly defeated a poorly crafted charter proposal in the city’s Question 2, Wonsley Worlobah calls the leader a “prop” and suggests that the record number of people turning out to the polls were duped after one of the longest and most difficult – combated and substantial campaigns in the city’s recent history.

In fact, neighbors of Minneapolis, especially in areas most affected by the rise in crime, have considered the matter carefully and finally understood the specious arguments offered by Yes 4 Minneapolis and allies like Wonsley Worlobah. To the extent that the Chief’s clarity on the shortcomings of Question 2 helped voters achieve this understanding, in my opinion this was one of his great acts of final service to his community.

Having had the honor of serving on city council for a decade, I wish the elected council member the best of luck in her tenure. But she’s off to a bad start with her recent moody comment that demeans Chef Arradondo at a time when he deserves our thanks.

The writer is president and CEO of the Minneapolis Downtown Council and the Downtown Improvement District.

Newly elected city council member Robin Wonsley Worlobah totally nailed it in his opinion piece. She captures things that frustrate me and make me angry. She hits every point squarely. For me the point is that we have been played. I do not like it. She made the case directly and powerfully.

His last paragraph sums up where we need to go: â€œTrue public safety begins with public stability. It means investing in our communities from scratch by fully funding basic health and safety needs like housing, addiction treatment services, nonviolent crisis response teams and It also means a structure of public accountability and oversight that is transparent and has the real power to hold the police to account.

Bam! Go ahead, new board member.

No sooner was a state revenue surplus announced than proposals were made to eliminate the social security tax (“The state is set for a historic surplus”, December 8). I rarely agree with the leader of the parliamentary minority Kurt Daudt, but it is an issue that should be studied. Only Colorado, Connecticut, Kansas, Minnesota, Missouri, Montana, Nebraska, New Mexico, North Dakota, Rhode Island, Utah, Vermont and West Virginia require security social, nine of them offering limited tax credits. The LDF will probably oppose this effort and it will then disappear into the partisan fog. But should it fail? What’s wrong with a rational, bipartisan approach to exploring the ramifications? As a retiree, I have a bias to be sure. However, I also see an ever-increasing number of retired colleagues moving to states that do not tax the tax benefits, primarily Florida, Arizona, and South Dakota.

What is the cost of this exodus? These retirees no longer buy gas, food, and other goods and services that are too numerous to name here. How much do we lose in collecting sales tax? What is the impact on property tax revenue? What is the net difference between tax revenue and lost income of retirees? Is it possible that the elimination of the social security tax could stem the tide? and maybe even someday make the North Star State a destination for retirees? What’s the downside to having an impartial review of this idea?

Thank goodness for kindhearted people like the dwindling number of direct support professionals caring for the most vulnerable Minnesotans. This includes my 84 year old brother who is frail, has a developmental disability and lives in a long term care facility.

His name is Lenny and he’s a lover. (He would tell you, â€œI know I am!â€) But his care has never been so precarious, as the December 6 commentary â€œA cry for help in the service of the disabledâ€ indicates.

So thank goodness Governor Tim Walz – our kind-hearted and far-sighted leader – acknowledged that the chronic workforce crisis is putting Minnesota’s long-term care facilities on the brink of collapse.

The current mass exodus of caregivers exceeds anything the industry has known. It threatens the lives of those we love.

Governor Walz has joined the National Guard to intervene as temporary caregivers in nursing homes. Recently, the governor also launched a plan to use funding from the US bailout to pay for certified practical nurses courses. In time, this should pave the way for a desperately needed infusion from professional caregivers.

I am grateful that our governor responded with urgency. I just hope these measures are not too small, too late. I suspect that many residents have already paid a heavy price for the staff shortage.

According to the most recent reports from the Department of Employment and Economic Development, caregiver positions have one of the highest numbers of vacancies of any occupation in the state – and they have continued to rise. increase during the pandemic.

Even before COVID hit, my brother could tell when staff were struggling to care for the six residents of his home. Her roommates have severe disabilities and complex health problems; most are elderly and need wheelchairs.

The caregiver’s job is physically and emotionally demanding, but the starting salary is around $ 12 an hour – less than what some fast food workers earn. Not surprisingly, staff turnover has been constant. The workers are exhausted, discouraged – and are leaving en masse. Offering a variety of rewards and incentives hasn’t done much to increase retention or attract new workers.

For my brother, the understaffing could mean no one to share his stories with that day. He may need to skip his morning shave or wait to take a shower. There is no doubt that residents of different health care facilities face much greater hardships.

When your day-to-day life relies on the helping hands and comforting pleas of paid caregivers, it is dark and dreary days. But there is a bright spot, Minnesota.

We now have a historic budget surplus, exceeding $ 7 billion. Let’s use some of this bounty to address the shortage of direct support professionals – beyond interim measures like the National Guard.

Let’s find smart ways to fortify the pipeline now – immediately – and for years to come. Longevity increases in people with intellectual and physical disabilities. And the sad fact is that many more of our beloved loved ones will outlive our ability to care for them at home.

I don’t know if my brother will be able to stay in his establishment. They are doing their best. But I know that we are all keepers of our brothers. And for the sake of our own humanity and our self-respect, we must do better to take care of those who cannot take care of themselves. The need is urgent.

We want to hear from you. Send us your thoughts here.