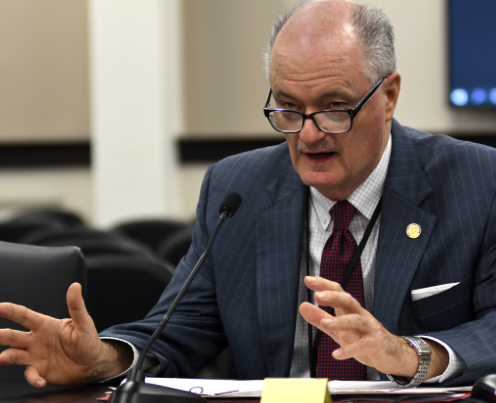 With each passing day of the session, you can feel the legislative efforts intensify as lawmakers seek to enact bills that are important to them and, most importantly, beneficial to their constituents. Budget review continues in the State Senate, and during the eighth week of session, we introduced and passed the following bills:

Senate Bill 194 is a tax relief plan in response to inflation, which has reached its highest level in 40 years. Under the Senate plan, presented yesterday at a special meeting of the Appropriations and Revenue Committee, every taxpayer working in Kentucky will receive up to $500, every household up to $1,000. This tax refund is possible due to the conservative Commonwealth budget; unexpected and exceptional revenue growth is expected to generate more than $1.94 billion in surplus funds that rightfully belong to Kentucky taxpayers. This plan will keep more money in taxpayers’ pockets and give them the tools to make choices that are right for their families.

Joint Senate Resolution 150 aims to end the COVID-19 state of emergency declared by Governor Andy Beshear on March 6. This week, it was voted favorably out of committee and out of the Senate floor.

Prior to the Legislature’s involvement in COVID-related decision-making in 2020, the Governor imposed widespread damaging mandates across the state. Elective medical procedures were shut down, statewide mask mandates were imposed, in-person student learning was halted, churches were targeted, businesses were forced to shut down and travel between states has been restricted. Since the start of the pandemic, overdose deaths, suicides and rates of child abuse have soared. If lawmakers don’t repeal this current state of emergency by March 7, it will expire on April 15 and the governor will have the option to file another extension. The General Assembly would then be unable to limit the extreme actions our Governor has proven prone to, stoking further fear in the constituency and further damaging our economy.

SJR 150 is a thoughtful approach to ending Kentucky’s state of emergency. This gives the executive time to determine whether to file by-laws based on existing statutory authority. This encourages the governor to engage the legislature instead of unilaterally dictating policy. Suppose the governor chooses not to include the General Assembly in the legislation. In this case, it will be obvious to Commonwealth residents that he is playing politics with their lives and livelihoods. With COVID-19 here to stay, it’s finally time for Kentucky to get back to normal and declare COVID endemic, not a pandemic anymore.

Senate Bill 138, also known as the Teaching American Principles Act, extends existing elementary social studies standards to middle and high schools. It encourages a study of the historical records of the United States and unites students around our nation’s history, without dividing them.

SB 138 preserves classroom discussion of controversial aspects of history and historical oppression of a particular group of people. It also maintains a teacher’s ability to teach current affairs on controversial topics and help students learn how to think rather than what to think. It supports civic learning in contexts that students may encounter in their lives, such as the legislative process. The bill also allows teachers to choose whether or not to participate in diversity-based training programs.

It does not circumvent the process of adopting established standards, diminish the professional growth and development of employees, or prevent candid conversations about past injustices. It prohibits additional assignments, projects, or credits on political, social policy, or lobbying activities that a student or family opposes.

SB 138 was written in response to the growing concerns of parents, students, and teachers that our nation’s history is being rewritten in the academic setting. This is a growing trend nationwide, causing division and angst among parents and school boards. SB 138 seeks to unify these groups in the Commonwealth through the inclusion of our nation’s primary source historical records that embrace the good, the bad, and the ugly of authentic American history.

Senate Bill 124 allows Commercial Driver’s License (CDL) holders to renew expired licenses less than five years old without taking both the knowledge and skill tests. This applies only to CDL licensees whose license has not been suspended, revoked or disqualified. Drivers must submit medical clearance, self-certification, criminal background check, driving history review and vision test. Former CDL licensees whose license was suspended due to failure to submit a medical evaluation may renew their license. Finally, it allows drivers to keep their hazardous materials endorsements if they retake the required exams.

Senate Bill 133 reorganizes the offices within the Cabinet for Health and Family Services by placing the Office of Data Analysis under the Office of the Secretary within the CHFS. The bill also expands the responsibility of the Office of Inspector General (OIG) by establishing the Kentucky Health Information Exchange and its oversight and transferring the Department of Telehealth Services to the OIG. Finally, SB 133 moves the Health Benefits Exchange to the Department of Medicaid Services.

Senate Bill 148 redefines “controlled-environment agricultural facilities” to allow the Kentucky Department of Housing, Buildings, and Construction to grant exemptions to benefit Kentucky agribusinesses by reforming building codes. He defines them as a facility that uses a technologically advanced form of hydroponic or soilless production, which includes a combination of engineering, plant science, and computer-managed greenhouse control technologies in growing spaces. All connected sorting, packing and storage areas allow complete and stable control of the plant environment, including temperature, light and carbon dioxide. It also includes immediate sorting, packaging and shipping of fresh produce and should not be used for retail sale or allow open access to the public.

Senate Bill 152 provides that a local government is not required to comply with notice or hearing requirements and waiting periods before awarding a waste management franchise for the first time. This would only apply where the local government has been the sole provider of the same waste management services in the area and wishes to add a franchise. This is beneficial because the bill creates cost savings for cities, which has a positive fiscal impact.
Senate Bill 91 allows authorized dealers to conduct online sales and delivery of a motor vehicle to customer residences or other appropriate locations if requested by the customer. It modernizes the buying and selling of automobiles, allowing more in-market convenience for the consumer and trader.

Senate Bill 80 requires, where an autopsy is necessary, that the examination include genetic testing; If the results of the genetic tests determine the cause of death, the death notice should be reported to the Vital Statistics Vital Statistics office, which will record the cause of death on the death certificate. Information about the deceased person or the results of genetic tests may not be disclosed without the written, signed and acknowledged consent of the spouse or, failing that spouse, of the next of kin or, failing that, of the person who assumes responsibility for dispose of the body.
If you have any questions or comments on these or any other public policy issues, I can be reached by phone in Frankfurt at 502-564-8100 or at home at 859-384-7506. You can also call the Legislative Messages Line at 1-800-372-7181 to share your thoughts on bills being considered by the legislature. Please direct all responses to me through my page on the Legislative Research Commission website www.legislature.ky.gov, where you can also access the bills described in this legislative update.

Sen. John Schickel (R-Union) represents Boone County’s North and Central 11th District. Senator Schickel is chairman of the Senate Committee on Licensing and Professions. He is also a member of the Senate Standing Committees on the Judiciary, Banking and Insurance, Natural Resources, and Energy, and is a liaison member of the Budget Review Subcommittee on Justice and the Judiciary.

Woman donates plasma every week to pay for Disney trips

Advice will hit thousands of homeowners with a stealthy tax grab