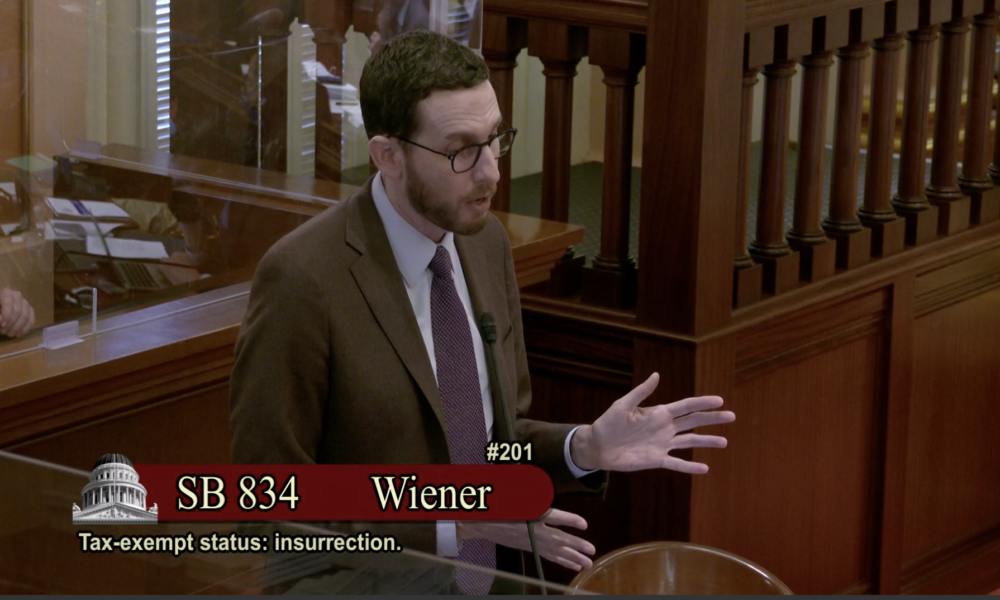 SACRAMENTO — Sen. Scott Wiener’s (D-San Francisco) Senate Bill 834, the Insurgency No Tax Exemption Act, passed the Senate by a 28-0 vote on Monday. He will now travel to the Assembly for the policy committee hearings.

SB 834 is the nation’s first bill that will revoke the California tax-exempt status of nonprofit organizations that participate in or instigate efforts to overthrow the United States government or any state government. Nonprofits have used the “big lie” — the fraudulent notion that the 2020 election was stolen — to raise funds and channel money to extremist and anti-democratic initiatives like the January 6 insurgency.

“On January 6, 2021, the peaceful transfer of power in our democracy was threatened,” Wiener said. “And for the first time since the civil war, people died. We cannot and will not allow organizations that aid and abet the insurgency—that break the law by trying to overthrow the U.S. government—operate with tax-exempt status. The people of California should not subsidize the insurgency.

The January 6, 2021, uprising took place, when pro-Trump extremists – in response to the false narrative that Democrats “stole” the 2020 election and were instigated by then-President Donald Trump – violated the United States Capitol. Five people were killed as a result of this uprising and hundreds were injured.

Vice President Pence and President Pelosi were specific targets of this vicious attack on national democracy. Many nonprofits that supported the insurgency and continue to perpetuate lies about the 2020 election in hopes of nullifying the results are still operating with tax-exempt status, both federally and domestically. state level.

SB 834 clarifies the Franchise Tax Board’s authority to revoke a nonprofit’s California tax-exempt status if the California Attorney General determines that the nonprofit organization has actively engaged in or incited to: treason, mistake of treason, insurrection, seditious conspiracy, advocating the overthrow of the government or government of a state, or advocating mutiny by members of the military or naval forces of the United States (1.)

Under SB 834, if the Attorney General finds that a nonprofit organization has instigated or actively engaged in actions to or may imminently violate one or more of these crimes, it will notify the FTB. , who will then have the ability to revoke the tax-exempt status of the association.

For out-of-state nonprofits that engage in or incite insurrection, they will be prohibited from registering to raise funds in California.

The United States Supreme Court has ruled that the purpose of charities claiming tax-exempt status “cannot be unlawful or contrary to public order.” Trying to overturn the election and violently attacking our lawmakers fits the bill. SB 834 will ensure that these organizations no longer claim this financial benefit.

Authoritarian and anti-democratic organizations have increasingly used the “big lie” to raise funds, and this narrative has generated millions of dollars in tax-free donations. And many new organizations have sprung up over the past year, hoping to follow the bandwagon of the insurgency and profit from it.

These include California nonprofits and nonprofits registered in other states that fundraise in California. These organizations, which fundamentally undermine our democracy and promote the destruction of free and fair elections in America, should not be allowed to operate with benefits like tax-exempt status.

For example, the leader of the Oath Keepers, a national militia movement, was charged with seditious conspiracy. Although the Oath Keepers do not have tax-exempt status in California, they do have an “educational foundation” with federal-exempt status and tax-exempt branches in several states. In the words of one expert, “one can only assume that [funds contributed to the Oath Keepers]who [donors were] able to deduct from their federal taxes, traveled to transport and lodge members of the group believed to participate in the ensuing riots. (2.) Under no circumstances should these organizations be allowed to use tax deductions to help fund illegal activities.

There is precedent for making this distinction in the California tax code. Under federal and California law, for example, if a nonprofit organization supports terrorism, its tax-exempt status is suspended. Non-profit organizations that support the insurgency should receive the same treatment.

Breaking the cycle of debt – here’s how to move forward

The Bahamas urged: ‘Go back to the tourism sector’