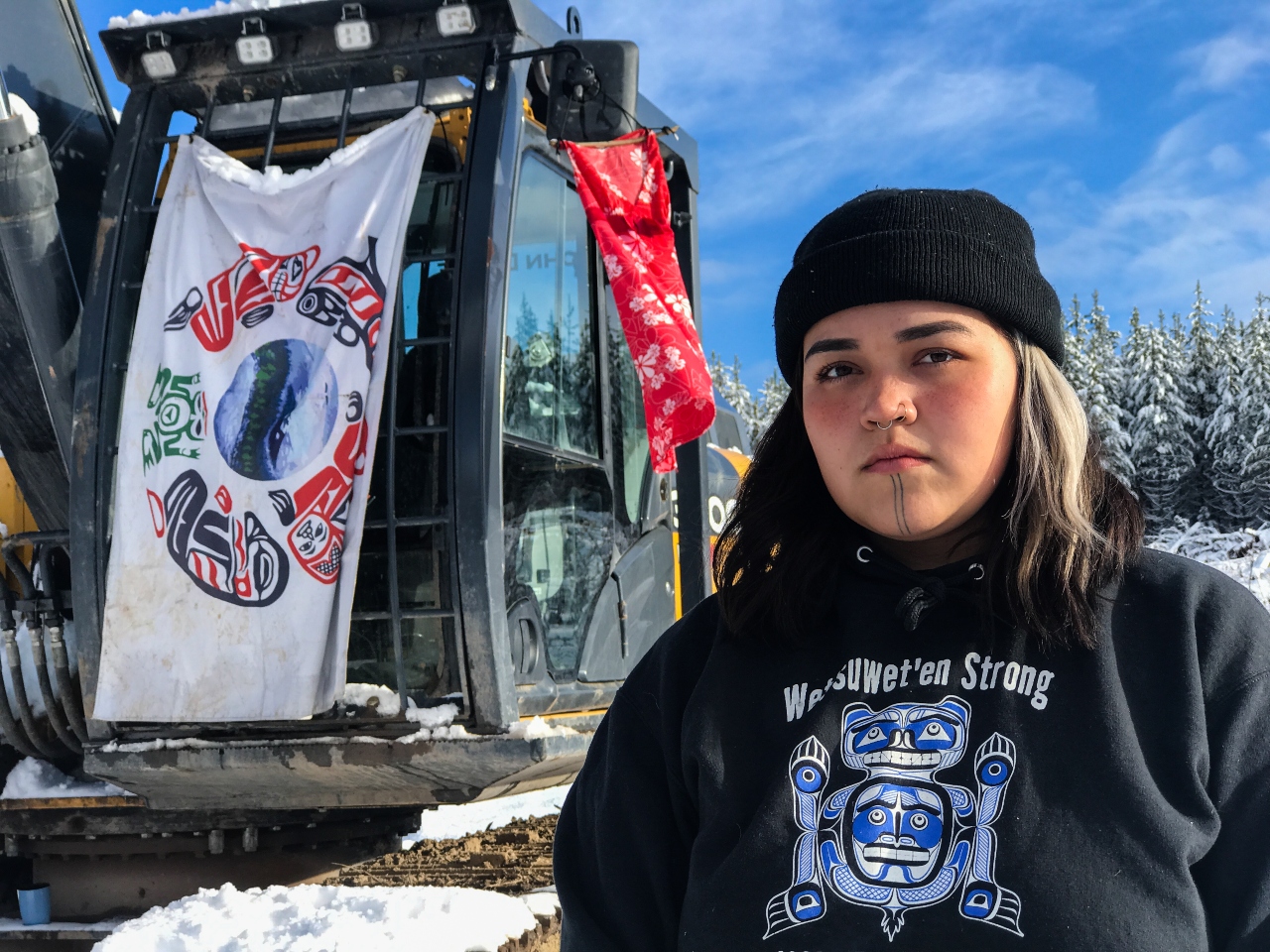 Shay Lynn Sampson, the life force and the “poison-filled pipe”

Shay Lynn Sampson is determined not to tell her children what salmon tasted like or what it was like living near their land. She is one of the indigenous peoples preventing Coastal GasLink (CGL) from operating a pipeline under Wedzin Kwa (Morice River), the source of pristine water for the Wet’suwet’en and their close allies downstream, the Gitxsan.

Get the best stories delivered to your inbox.

Our award-winning journalists bring you the news that touches you, Canada and the world. Don’t miss out.

Sampson, 22, told me in November about behind a blockade inside a “Tiny House”, purposefully built along with many other structures to house people putting their bodies at risk to stop the project. Sampson is also the Youth Engagement Coordinator for Indigenous climate action.

Where are you and why

I’m near Houston in northern British Columbia on a small side road next to a forest access road. I am here at the invitation of the only authority I recognize on this land, DinÃ¯ ze ‘Woos, the hereditary chief of Cas Yikh, the home of the grizzly bears of the Gidimt’en clan. He and his people occupied this yintah for thousands of years and remain sovereign and undefeated. Even Canadian courts have recognized the role of hereditary chiefs in protecting this unceded land.

What people are reading

Not only did the people here never relinquish their title, but they actively and victoriously protected it. In 2010, 13 pipeline projects, including Enbridge, Pacific Trails Pipeline, Spectra and Pembina, proposed to cross Wet’suwet’en territory. The hereditary heads of houses of the five clans declared that no pipeline would ever pass. All withdrew except CGL.

In 2019, a wave of protests swept across the country in solidarity with the Wet’suwet’en’s lack of consent for this pipeline. In September, when it became evident that CGL was advancing on its territory, DinÃ¯ ze ‘Woos called for protection and defense. Native and settler guests responded to the invitation. But days after the reoccupation, the RCMP made violent arrests and subjected unarmed guests to police brutality. In response, a delegation of Haudenosaunee showed up and took the RCMP out of the territory. The police did not return.

In late October, Chief Dtsachyl (Adam Gagnon) seized heavy equipment from a series of construction sites along the historic Kweese War Trail in northern British Columbia, enforcing old trespassing laws against the pipeline contractors who ignored his warnings for a year. He was stopped. On November 14, the eviction of the Wet’suwet’en hereditary chiefs was again enforced and CGL employees had eight hours to let. As a Gitxsan, I come from a long line of Wet’suwet’en allies. We are downstream of this project. I’m doing my part to make sure this pipeline never gets built.

“I am so proud of who I am, where I come from and what I stand for,” said 22-year-old Shay Lynn Sampson. #CoastalGasLink # Wet’suwet’en #Blockades

Tell us about a day of your life behind the dams.

It is snowing and it is very cold. Much of our time is spent preparing for winter and keeping our bodies warm. Our living and working spaces are heated with firewood. We have strong community support to make sure we have food and water. We live each day as it comes, knowing the RCMP could return. The love we have for each other, the joy we feel getting out and protecting the land, and the tremendous support we receive from all over Turtle Island and the world keep us strong and warm. .

What have you experienced with the RCMP?

Sometimes they taunt us and ridicule us or try to manipulate us into giving them information or giving in. Sometimes they come and destroy our freshwater containers. They arrested two hereditary chiefs and denied them access to their lands, which is a violation of our universal right as indigenous people. More recently, they have used what they call â€œrespect for painâ€ – which we call torture – on another defender. He locked himself in a hard block to prevent the construction from moving forward. They lifted his legs and twisted his hands, causing excruciating pain while telling him that if he unlocked, the pain would stop. He screamed for over an hour. Since he still hasn’t broken up, a policewoman tried to demoralize him by telling him that he was alone. I was locked in a hard block and heard everything the whole time. I’ll never forget.

The RCMP was formed to get rid of the land to make way for the extractive industry. He supported the government to steal our children. Many of the same officers in this platoon were licensed to film Wet’suwet’en in 2019. They always have. We are only the last. Maybe they’ll be back or maybe not. We’re not going anywhere.

Why is operating a pipeline under a water source so problematic?

It’s not just a pipe – it’s a pipe filled with poison that is susceptible to breaking. â€œLiquefied natural gasâ€ or â€œLNGâ€ is an industrial term that covers up the dirty truth of hydraulic fracturing. Toxic carcinogens are used in hydraulic fracturing, and there have been thousands of accidents, injuries and deaths on gas transmission lines. The damage caused by pipeline spills is causing irreparable damage to the Earth and our people. Many types of salmon spawn in these headwaters. It is the life force of so many other creatures and beings and of our people.

The laying of the pipe is the last part of a destructive process of clearing and building roads and other forms of preparation. Coastal GasLink has violated or ignored hundreds of environmental assessment orders on this project. They have a terrible record and they don’t feel responsible.

More importantly, and while it was not so dangerous, Canadian law requires the free, prior and informed consent of licensees. There was no consent. They are not allowed to be here. They were asked to leave. They’re trespassing.

Tell us what brought you here.

I grew up in the nearby town of Hazelton, but grew up far from the land. There wasn’t much to do and I was happy to go to Victoria for my university studies. While there, I participated in the Wet’suwet’en occupation of the British Columbia Legislature in 2019 to protest this pipeline. My hereditary chief Gitxsan asked me to come home and tell my people about the event. I have been honored to be seated with leaders who hold rights and titles thousands of years old. When I saw how much support there was for the occupation and how important it was to my elders, I looked at my land in an entirely new way and was transformed. Now I can’t imagine wanting to be anywhere else. I have learned that when I am connected to the earth, I am strong.

Do you have any advice for other young people?

At Indigenous Climate Action, I remind young people that indigenous peoples around the world continue to be leaders in the fight for a just transition to a low-carbon world. If you are an Aboriginal person, know that you carry this heritage. For all the young people, it might help to know that I had no idea how to make sense of my place in the world. But I got involved and found my people and now it’s so clear. I am so proud of who I am, where I come from and what I represent. This is what awaits you when you sign up.

What would you like to say to older readers?

Let your MP and MP know that you are not supporting them to bolster this destructive project and that you are not okay with your tax dollars to subsidize projects like this. Tell your bank you want them to stop digging our collective graves by lending to fossil fuel companies. Let decision-makers know that you do not consent to RCMP brutality. Remind them that our hereditary rulers have jurisdiction over this land.