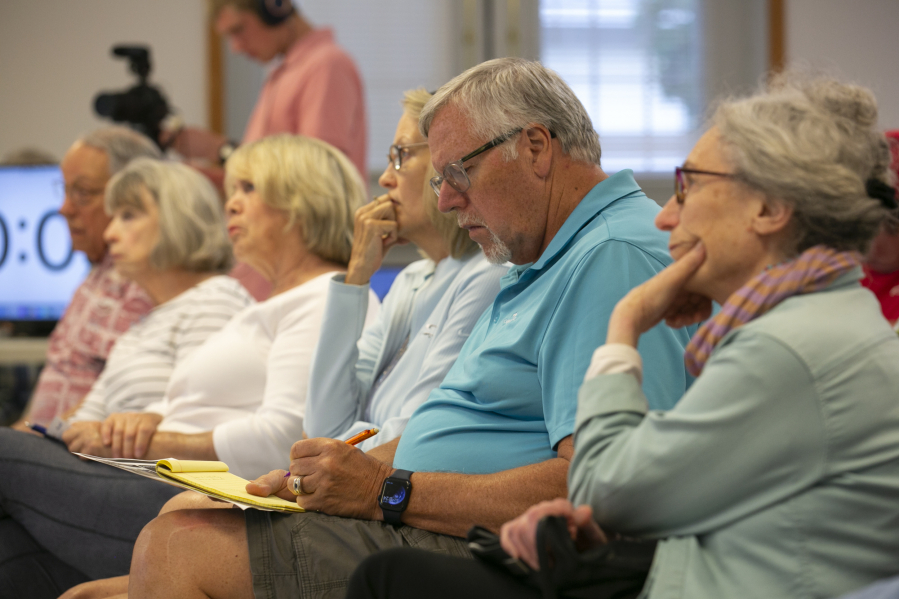 Candidates for the election in Vancouver gathered for an indoor community forum in person for the first time in more than a year on Tuesday evening, sharing their varied perspectives on COVID-19, homelessness and the environment.

The event, hosted by the Heights District Neighborhood Coalition, offered candidates an early chance to present themselves publicly. It also highlighted the sheer amount of daylight between their respective views.

COVID-19 and the resulting economic shutdown was a wedge. Two candidates – mayor challenger Doug Coop and city council hopeful Justin Forsman – expressed their belief that the pandemic was overblown and that statewide restrictions on businesses and gatherings were unnecessary. The same candidates, along with mayoral candidate Earl Bowerman, also claimed that the climate change reports were fabricated in the same way.

â€œCapture carbon? It’s pretty much a joke. I will say it. It’s a hoax. Guys, we have to be careful, it’s just a way to make money, â€Coop said.

Bowerman and Forsman both used the three minutes allotted for their opening remarks to say that they had decided to run for public office because they felt white people were kicked out or guilty of running for office (in Vancouver, a councilor municipal black has not sat behind the stage since the 1970s). Forsman said he was “disgusted, to be completely honest” with the current state of politics.

Bowerman said: â€œAnytime we hear about white supremacy and we need more people of color – well, I’m working on that. I have age spots, and they are dark brown. I think it’s ridiculous to separate people by color. â€œThere is no special privilege for anyone, and there is no difficulty for anyone imposed by law enforcement or someone like that,â€ said Bowerman, who until last year was chairman of the Clark County Republican Party.

The differences between the candidates were glaring. Kim Harless, program coordinator for a state-owned non-profit organization that helps recycle paint cans, used her opening remarks to highlight her experiences as a person of color in Vancouver and her background in science and science. environment.

â€œI am a native and Hispanic,â€ said Harless. â€œWe cannot continue this status quo without this representation for our growing and diverse communityâ€¦ I’ve been on WIC, I’ve been on food stamps, I’ve been so close to living on the streets. I have these lived experiences that you cannot learn or be taught.

Harless and Forsman are both running for position 1 on city council, which will remain empty when current councilor Laurie Lebowsky finishes her term this year.

The two also argued over Forsman’s claim that climate change is “a hoax.”

“I’m a scientist. This is not a hoax. We need to fix it urgently,” Harless replied.

A third candidate for the seat, Mike Pond, was present but did not participate. Event organizer Kate Fernald said he responded too late to the group’s invitation to join the discussion. John Blom, the former Clark County Councilor also vying for position 1, was not present.

While three candidates are also running for position 2 on Vancouver City Council, only the current councilor seeking re-election, Erik Paulsen, was present. He did not participate. Challenger Kara Tess did not respond until after the event was over, and challenger Tami Martin did not respond, according to Fernald.

Of the eight candidates who spoke to the crowd on Tuesday, only one currently holds an elected post: Vancouver Mayor Anne McEnerny-Ogle.

While Coop and Bowerman spent much of their time talking generally about national issues and current political discourse, McEnerny-Ogle’s focus was relatively granular. She spoke about the use of Vancouver’s municipal code to resolve disputes between citizens and city staff, as well as the opportunities offered by a new HP Inc. campus and the biotech industry to create paid jobs for a living. In the region.

In response to a question about homelessness, McEnerny-Ogle explained that Clark County – not the city of Vancouver – is actually the lead agency that receives the funding and distributes the resources.

â€œI’ll say it again, because a lot of people think the city is the lead agency, but we’re not. This is the county, â€McEnerny-Ogle said, adding that Vancouver is no longer focusing on providing comprehensive, long-term services and instead developing emergency shelters.

â€œThey are now showing us the desirability of these shelters. It wasn’t in their wheelhouse before.

The trio are running for the seat currently held by Linda Glover, who, like Lebowsky, has not sought re-election.

Their discussion ventured further into the weeds of local issues, highlighting a controversial program that grants tax breaks to developers of multi-family homes. They also dug into a bundle of fees and services offered under the Stronger Vancouver initiative.

Perez criticized the multi-family tax exemption program, pointing out that it is currently tied to Portland’s higher income levels and leaves rents too high for many Vancouver families.

â€œI think we need to be more strategic,â€ Perez said, adding that she would work with the Legislature to improve the program. â€œI think it’s an important part, not only for city council, but also to bring developers to the table. “

Gellatly said he disagreed with one proposed element of a stronger Vancouver that has since been removed – a business and trade tax.

â€œThe Stronger Vancouver package was largely just a small business tax package,â€ Gellatly said. â€œThey’re leaving Seattle, they’re leaving Portland, we could be that kind of bright spot. … All we can do is screw it up.

Yung, who frequently attends city council, commission and board meetings, said he had laid the groundwork enough to get started on his first day in office.

â€œI traveled all over town. I go to meetings of neighborhood associations. I go to NAACP meetings. I go to Republican meetings, I go to Democratic meetings, â€Yung said. â€œIt is so important that our board members get involved in our community.