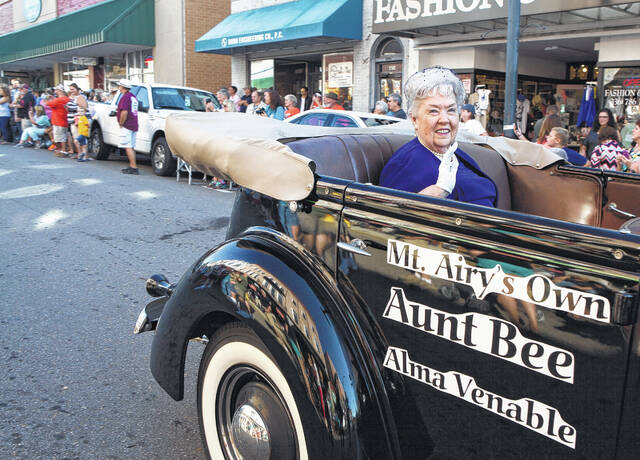 Alma Venable has made an impact here in Mount Airy and beyond as one of Mayberry’s most recognizable ambassadors and owner of the Mayberry Motor Inn. She was an advocate for preserving the rich legacy of Mount Airy’s fictional alter ego while welcoming guests into the community year-round.

Venable died September 4 at her home in Mount Airy, she was 84.

Donna Hiatt called her dear friend a ‘Mayberry icon’ while others who knew her called her grandma despite missing a drop of family blood. “People loved her and stayed with her from all over the country. She was an angel on earth and is now an angel in heaven,” Hiatt said of her 32-year-old friend.

Like Hiatt, Tanya Jones of the Surry Arts Council was an old friend of Venable: “Since the 1970s, when we were talking to hotels about the tourist tax. Alma and her husband LP had the Mayberry Motor Inn before a lot of things in Mount Airy had Mayberry in their names.

This idea may have been prophetic and predates an unknown number of additional companies over the years with the Mayberry moniker which is now almost interchangeable with Mount Airy.

Jones continued, “They were prominently featured in the 1990 Washington Post article on Mayberry Days which was picked up by the AP and Mayberry Days originated as an annual event. Their purchases at the auction of the Frances Bavier estate became a tourist attraction before the others.

The legacy and legend of Aunt Bee’s room at the inn is well known. After the sale of the estate of Frances Bavier, TV’s Aunt Bee in 1990, a reporter asked Venable what she planned to do with the artifacts she had purchased from the late actress to whom she said: “I told him I was going to open an Aunt Bee room. The collection is an assortment of Bavier-owned memorabilia, complete with certificates of authenticity, including hats, accessories and an ashtray made by fan-favorite George “Goober” Lindsey.

Jones and the Surry Arts Council co-ordinate the Mayberry Days festival, and she recalls Venable being always up for anything that was asked. “Alma and LP – and later grandchildren, Mikel, Josh and Jeremy Snow, have always been involved with Mayberry Days – the parade, Colonel Tim’s Talent Time and whatever the Surry Arts Council needed to make it happen works for the fans.”

Visitors to Mount Airy have memories of Venable that date back decades. David Browning, often seen locally as Deputy Barney Fife, made his first trip to Mayberry Days in 1991 and it was the following year that he first took up a long-term intermittent residency at the Mayberry Motor Inn at Jones’s suggestion. From 1992 to 2017, Browning said he was a regular guest of Venable’s at the Inn.

On his first visit he said: ‘I arrived at night and when I woke up the next morning Mikel was dressed in a deputy’s outfit and he had one foot on my bumper. He was writing me a ticket for crossing the line,” he said, recalling just one of the fond memories of days past. “Years later, I bought him a well-fitting MP cap.”

He said he was made to feel like a member of the family by Venable. “I would sit and chat with her and after her husband LP passed away, we became even closer.” Venable and her husband worked hard at the hostel, he said, but they also had fun. “She loved the visitors, just loved them and treated them like family.”

She had a plaque made to commemorate his visits, which he said was unnecessary. On subsequent stays, he and his wife would stare at the wall and see the plaque much to their amusement. “She didn’t have to do that,” he said of the honor, “Mount Airy is exactly that kind of place.”

“We weren’t related but our relationship, our friendship, grew and grew. I know this is not only a place to lay my head, but also someone to talk to,” he said. he remembers.

His hospitality and kindness will be missed, but they have not yet been lost to the winds of time. The traditions she started at the Mayberry Motor Inn are even delivered now during this week’s iteration of Mayberry Days.

A simple plan for success will be to “keep doing it like grandma did,” Mikel said. This includes honoring traditions as old as the right of first refusal for guests who have attended Mayberry Days since the beginning.

Some of those regular guests, Snow said, have been coming long enough that her twin brothers Josh and Jeremy have known them almost since birth.

Along with Jeremy, he will continue to operate the inn and hopes to keep it in the family for generations to come. “As long as there is tourism, we will be there.”

Tim White, the host of Song of the Mountain on PBS, said Venable, “He was just the sweetest.” Tim White & Troublesome Hollow’s “Salute to Mayberry” show will feature many Mayberry songs and a tribute to Venable herself that will coincide with Mayberry Days at the Historic Earle Theater tomorrow, Friday, September 23, at 9:30 p.m. Tickets are $15. .

After many years of performing at Mount Airy, White will miss his friend’s familiarity. “Grandma, I would call her grandma – I know others didn’t, but I got it from the boys,” White recalled. “I would call sometimes and just ask to speak to Grandma. It made her smile when I called her Grandma.

White laughed and said there were no suites or rooms named after him, but that didn’t concern him, “I think all the rooms were named at that time. Besides, I not sure who you would take off the wall. There are a lot of great people there.

He said that Venable had been sick in the last years of her life and people hadn’t seen her as much. “So when she got dolled up and was going out and chatting with people, that really meant something.”

“I was at the Mayberry Motor Inn when she passed away and her grandson John came to tell me at the gazebo. Just as he did, my phone rang, and it was Mikel calling to let me know. For him, it was as if he was where he was supposed to be to hear from two of his grandsons almost at the same time.

White, Hiatt and the others hope the memory and spirit of Mount Airy’s Aunt Bee will live on. The legacy of the Mount Airy Motor Inn continues right now with visitors for Mayberry Days and reservations for the Fall Leaf Festival.

On Friday at The Earle, White and Troublesome Hollow will perform the music as another living tribute to Venable of which White said, “I loved the music. I never saw her play an instrument, but she loved to sing.

“A few months ago, the Surry Arts Council was contacted by Piedmont Triad International Airport – requesting a photo for review on the terminal wall. There hangs a huge canvas of a past Mayberry Days parade – Alma is front and center in a car with an Aunt Bee license plate,” Jones said.

Even now, Mount Airy is represented by its unofficial ambassador and brand representative. Alma Venable is still working hard for Mount Airy even during her eternal rest.

“We all loved her – I loved her and LP, and I appreciated their trust, their loyalty, their friendship – and their love. They will be missed, but I’m so grateful that Mikel is carrying on the tradition of the Mayberry Motor Inn,” Jones said.