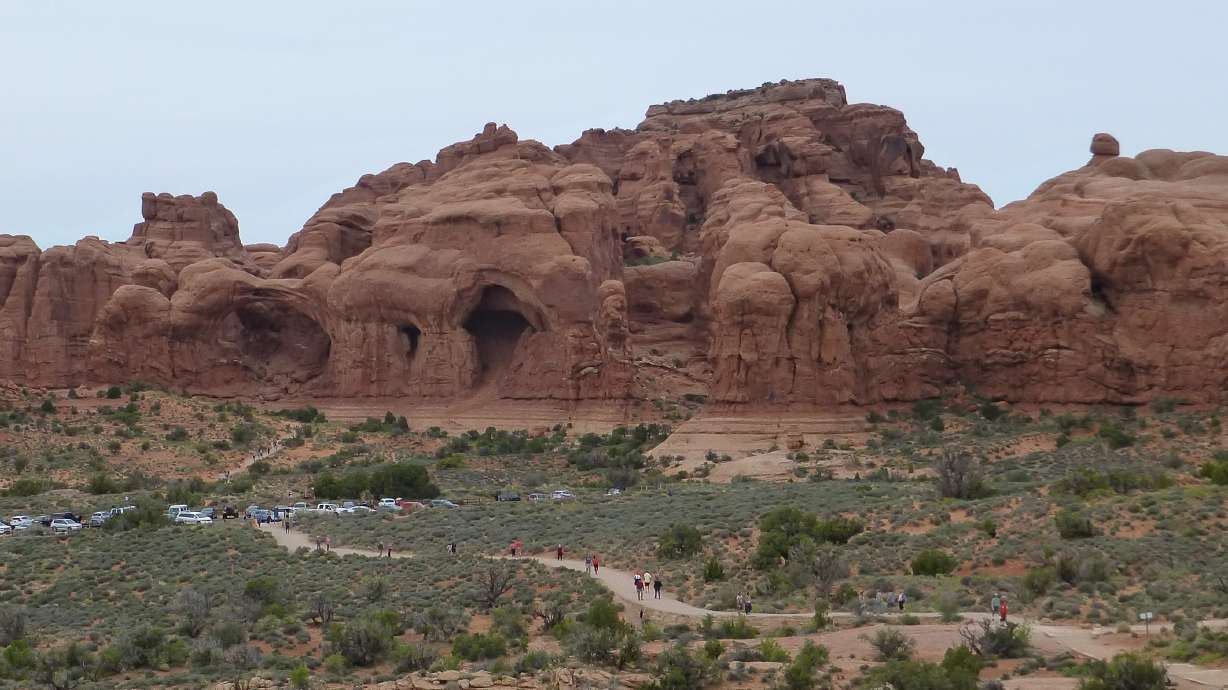 What caused the resurgence of the “Mighty 5” national parks?

An undated photo of visitors to Arches National Park. The park is currently testing a timed entry system to deal with spring and summer surges. (Robert La)

SALT LAKE CITY – The United States National Park Service was established in 1916 with the dual mission of conserving designated sites and making them widely accessible to the public. Balancing the two sides of this effort has been a struggle over the past decade as visitor numbers hit record highs year after year at many parks.

This upward trend was interrupted by the pandemic restrictions in 2020 which limited the number of visitors to the park. But new data from the National Park Service shows that visitors were eager to return the following year. More than 92 million people came to the country’s 63 national parks in 2021, more than any year before and 34% more than 10 years ago.

Utah’s national parks have seen an even more dramatic increase. Four of Utah’s five parks saw record numbers in 2021, and in total, the five parks welcomed more than 11 million visitors in 2021. That’s a 79% increase from 2011. Capitol Reef saw the biggest increase during this period, at 110% – more than doubling its previous guest list.

While Zion again had more visitors than any of Utah’s national parks in 2021, its close neighbor (and Utah’s smallest national park) Bryce Canyon had the most visitors per federal acre at 59, making it the busiest by this metric. In contrast, Canyonlands is Utah’s largest and least-visited park, with three visitors per acre in 2021.

A combination of contributing factors

It is not entirely a coincidence that the number of visitors to the park across the country began to increase more dramatically 100 years after the park service was organized. The park service commemorated its centennial with various promotions and many states took the opportunity to attract tourists. The Utah Tourism Board rode the wave in 2013 by launching the $3.1 million “Mighty Five” marketing campaign that reached neighboring states with impressive advertisements to lure tourists.

According to a recent study by a team of economists at Utah State University, the Mighty Five campaign was directly responsible for increased visitor numbers to Canyonlands, Capitol Reef and, to a lesser extent, Arches. But for Zion and Bryce Canyon, the researchers attributed broader national trends to the influx of visitors to those parks. In other words, “the marketing campaign had uneven effects across the five national parks,” the researchers reported.

Given that many tourists are aware of the crowds at the most popular parks, this finding was not entirely unexpected, said study author and professor Paul Jakus. “It didn’t surprise me that it was patchy, and we would see the strongest effects in less-visited parks,” Jakus told KSL.com. “Because these are clearly places people haven’t necessarily been to.”

Beyond tourism marketing, the National Park Service also attributes the increase in park visitors to a corresponding increase in the number of Americans reaching retirement age. Over the past decade, the fraction of people 65 and older has increased by about 34% according to the US Census Bureau, producing a trend line that resembles the number of visitors. International travel has also increased. For foreign tourists on vacation and retirees, a visit to the national park is often at the top of the list.

The virality of social media, combined with the ubiquity of information, has also played a significant role in attracting visitors, the park service says. Almost every visitor carries a phone equipped with a high-resolution camera, GPS, and various apps for finding trails and traveling. Thanks to the modern digital age, the ancient natural wonders that were once hidden have never been more visible and accessible.

A new approach at Arches

Whatever the causes, parks are trying new ways to keep visitors from flooding popular sites. From the start of the month, until September 3, Arches will pilot a timed entry reservation pilot program which requires most visitors to make reservations for a limited number of places at designated times throughout the day. . Zion also tried something similar for its most popular hikes. Ideally this approach will produce a more percolated stream of hikers along the red rock slopes.

“So far, I think the timed entry system is working well for Arches National Park,” said Zach Cooley, a photographer who lives in Moab and works in the surrounding area. “He’s already proven to be effective in managing crowds. That said, I imagine there are people who have to enter the park later in the day than desired, so they don’t have as much time to explore.”

To get an idea of ​​how the program might affect the number of visitors to Arches this year, Jakus suggests looking at Muir Woods National Monument in California, where a similar system has been implemented. “The total number of visits to Muir Woods has gone down from 2018, which is the first year they have the reservation system,” he pointed out. “It’s kind of what I would expect with Arches.”

Data and information from this year’s timed entry program will inform how Arches, and perhaps other parks, will manage crowds in the future. It’s a compromise, but I hope it will allow the National Park Service to fulfill both parts of its mission.

Robert Lawrence grew up in Murray, Utah and is currently a science writer based in New York. You can find more of his work at: www.robertlawrencephd.com.

Wish You Were Here: Iowa Goes All Out For Tourists | News, Sports, Jobs