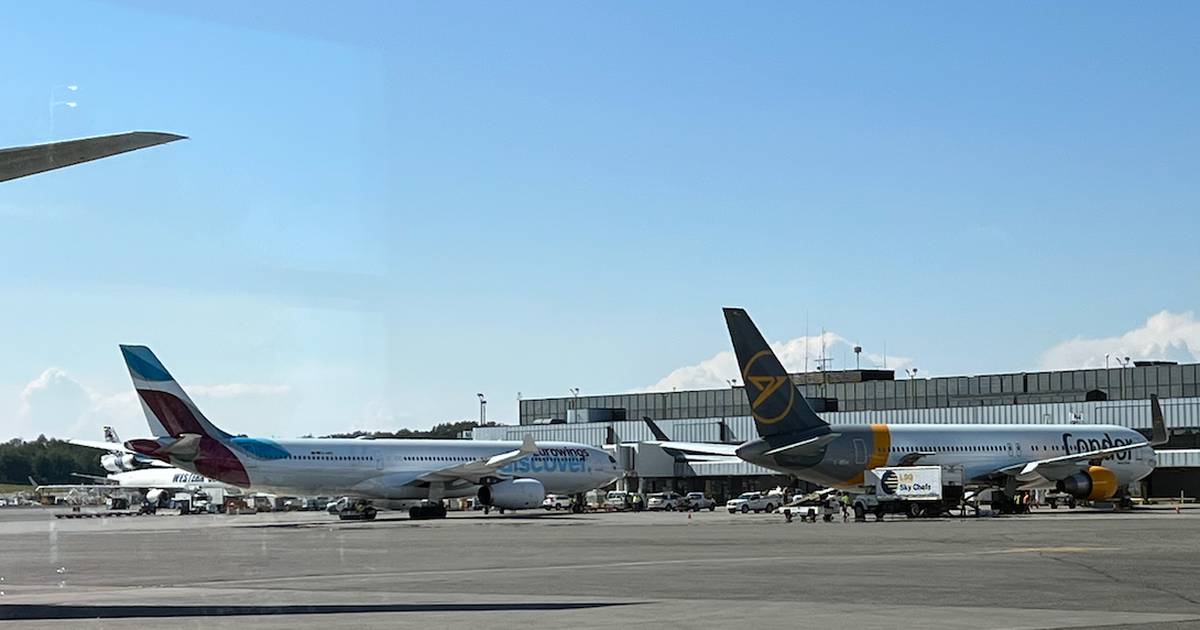 While Lower 48 airfares are still high, competition drives down the cost of flying from Anchorage to Europe

Bring up the subject of airfare with any Alaskan, and you better have a tissue ready. There will likely be wailing and gnashing of teeth about Lower 48 tickets costing over $1,000 round trip.

I just purchased a ticket to New Orleans at the end of September for $885 round trip. I shed bitter tears.

But tickets to Europe from Anchorage are getting cheaper, not more expensive. It’s because of the competition between Condor Air and Eurowings.

Condor is a household name in Alaska. The airline has served Frankfurt from Anchorage, Fairbanks and Whitehorse for over 20 years. Eurowings is a leisure airline startup that first landed in Anchorage on Monday, June 13. It is a subsidiary of Lufthansa.

Both airlines fly three times a week to Frankfurt. Both airlines are based in Germany and use Lufthansa flights to transport passengers to their final destinations, such as Barcelona, ​​Rome, Paris and Athens. Both airlines piggyback on a larger airline for frequent flyer points: Condor partners with Alaska Airlines while Eurowings works with Lufthansa and United.

Now that the season is in full swing, the two airlines are competing on prices as well as frequent flyer miles to coax travelers on board.

Recently, the US government dropped the requirement that travelers must test for COVID the day before returning to the United States. Changing this requirement will likely encourage more travelers to consider a trip to Europe this summer. In the past two years, no airline has offered non-stop service to Europe. Now there are two.

Prices for last minute trips to Europe from Anchorage are quite good. I booked tickets from Anchorage to Frankfurt on Thursday June 23, returning June 30 for $840 round trip on Condor. It’s ‘Economy Light’, which means there are additional charges for checked baggage and seat assignment.

To travel on Eurowings on the same dates, the cost would be much higher: $2,464 round trip. This price includes one checked bag.

From mid-July, prices between the two airlines are more similar. Between Anchorage and Rome, Condor charges $1,400 round trip on July 14. Eurowings charges $1,155 round trip departing July 18.

Between Anchorage and Athens, Condor charges $1,540 round trip, departing July 17 for one week. For the same dates, Eurowings charges $1,204 round trip. All fares are subject to change without notice – but I have tried to align similar flights and dates.

Travelers can earn and burn their Alaska Airlines miles on Condor. Previously, it was difficult to secure the non-stop journey to Frankfurt using miles. But today, you can get an economy class seat on Thursday, June 23 for 25,000 miles and $98. The best deal is to spend 45,000 miles for a premium economy seat, plus $98. There is more legroom and an increased baggage allowance. On June 30 return, only economy is available, plus a $218 fee. So for round trip economy class, it’s 50,000 miles and $316.

If you earn miles, your Condor flight between Anchorage and Frankfurt will earn you 9,320 elite qualifying miles for your MVP status.

I was unable to find Alaskan mileage seats for destinations beyond Frankfurt on Condor. But on Eurowings, there were MileagePlus seats for 30,000 miles each way to Rome, to Athens and to Barcelona.

There are a few booking considerations if you look at Eurowings. The airline has its own website, but you cannot book flights there. You must book on lufthansa.com or through your travel agent. You can also book with one of the major online travel agencies like Expedia or Priceline.

If you plan to book with Condor, it is important to have your Global Entry number on file when checking in at Anchorage Airport. This should give you a “pre-check” boarding pass so you can go through the short TSA line. But Global Entry is also supposed to help you when you return to the United States.

Supposedly, when you have your Global Entry card, you don’t have to fill out the usual customs declaration, which they give you on the flight back to Anchorage.

However, upon arrival in Anchorage, the Global Entry procedure did not work. We stopped at the special booth when we arrived and he took our picture and printed a receipt. But we still had to go through the regular line and fill out the paper customs declaration. Hopefully the process will be streamlined for the increased number of international travelers this summer.

Another warning for Condor travelers: you must provide the check-in agent with your Alaska Airlines frequent flyer number. Remember – or you won’t get the miles.

Although last-minute European travel may be more attractive now that the COVID testing requirement has ended, airports across Europe, including Frankfurt, are having problems coping with the growing number of travellers.

Staff shortages in areas such as security screening, check-in and baggage handling are hitting major airports like Frankfurt, according to German trade union Verdi.

“The situation will only get worse,” said Christine Behle, deputy chairman of Lufthansa’s supervisory board.

For example, Lufthansa and Eurowings preemptively canceled more than 900 flights in July to relieve some of the pressure from understaffing.

Passing through Frankfurt airport earlier this month, we waited over an hour to collect our luggage. This is because our Lufthansa flight from Naples was delayed for over two hours, arriving after most baggage handlers had returned home.

So if you need to change planes in Frankfurt, allow at least three hours to connect. This will protect you if your flight is late from Anchorage. Our flight to Frankfurt in May was delayed by two hours. For our return flight, the connections were too tight, so we chose to spend the previous night at the hotel. I redeemed Chase points to stay at a nearby Hyatt property.

Competition between Condor and Eurowings keeps prices low for non-stop flights to Europe. But would-be travelers should be prepared for “irregular operations” this summer.