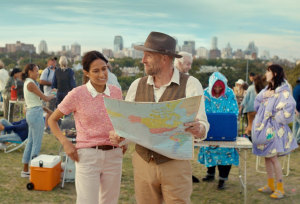 The 2022 lamb commercial, which has become an integral part of the start of every new year, struck a direct blow to the nerve of desire, to be free from COVID, to take back our place in the world.

The satirical work by The Monkeys, part of Accenture Interactive, for Meat & Livestock Australia (MLA), digs into some of the absurdities of the pandemic and puts Australia back on the map after being isolated for so long the world had forgotten it existed.

Industry insiders say the ad is more big-screen entertainment rather than hard-selling, a roast with all the trimmings rather than just a barbecue.

It grabs the audience and holds it until the end, when many come back to watch it again.

Does the ad reach its target?

Graeme Yardy, Domestic Market Manager at MLA: “It plays several roles throughout the year. The Summer Lamb campaign is launched in January to stimulate sales of lamb for summer-related activities such as barbecuing. But this recognition extends throughout the year. It is now highly anticipated every summer and lamb producers are proud to see their product featured in such popular advertising.

“Branding and recognition is one thing, but we need to act on public awareness of Australian lamb. Alongside the Summer Lamb campaign, we are working with retailers to deliver tailored marketing and lamb recipes directly to consumers when they walk into their stores.

Freelance designer Adrian Elton“How many ways can you chop the cutlet?

“Well, when it’s in the hairy hands of monkeys, the permutations seem like a fractal mandala.

“In a place that owes more to the big screen than the covidiot box, an annual tradition has been given another terrific twist; neatly and hilariously summing up a year in the life below.

“Like a glorious roast of lamb, festooned with cloves of garlic and rosemary, the ad is peppered with a litany of eminently relevant political and pop cultural references. From a French nuclear submarine, to a surreptitiously placed videotape labeled, “Trump Kompromat,” to the Elon/Jeff interstellar bromance; each new viewing is punctuated by yet another delicious bite.

“The principle is simple and so well observed. Well wedged in our isolated bubbles, we have forgotten the world, and the world has forgotten us. Cue the big guns. Or Sam Kekovich who overcomes the “lambdemic” with the “National Lamb Rollout”.
“Indeed, it’s a telling day when an ad features the most exciting watch of the year.”

Sally Joubert, CEO, Luma Research: “Have to love the new lamb ad. After the Christmas ads disappeared, we’re still looking forward to the annual lamb ad being released and this year we’re not disappointed .

“’The Lost Country of the Pacific’ does a great job of grabbing our attention and making us feel even more positive about our national dish.

“Australians sympathize with the idea of ​​reuniting our beloved country with the rest of the world after such a long period of isolation. We want people to visit and enjoy our famous lamb barbies.

“Our creative tests show that most of us liked the people and advertising made them feel good about Aussie lamb. And most of us liked the humor (though less so in WA) We also found that the ad is most effective with over 45s who find it more entertaining and want to keep watching it over and over again.

“Congratulations to Meat and Livestock Australia on another memorable and compelling announcement. Bring on the Barbie!

Michel Klaehn at QUT College: “At first it looks more like a tourist ad than a lamb ad. Remember “throwing a shrimp at a barbie”?

“I liked the writing, a lot of little and not so little details made it clever.

“I’m old enough to know the original ad with Sam but I’m starting to wonder if a lot of people would still know who he is (sorry Sam). Maybe it’s time for an update, keeping the main idea of ​​lamb saving the world/Australia, but also letting go.

“It’s an apparent contradiction – that is, a combination of elements that seems illogical at first glance, but becomes more possible the more you think about it, as the final conversation illustrates.”

Question: “I told you there was a whole world there. So where do you think you will go first? »

He says the main function of lamb advertising is to attract attention. The persuasion must come from the subtext.

“Advertising stimulates the viewer and makes him think,” explains van Laer. “Yet because it is less directly persuasive than previous lamb ads, this year’s ad also evokes unintended associations and thoughts. The campaign therefore provides both Barbie and food for thought.

“Their approach has always harnessed two powerful drivers of advertising success: storytelling and humor. This year’s ad, like many before, finds harmless comedy in the current state of the nation.

“And while the MLA team probably wouldn’t have predicted where we’d be now relative to when the ad was originally conceived (e.g. meat supplies being stripped from supermarket shelves), if you do humor and put smiles on people’s faces, they will generally overlook subtle insensitivities.

“This time of year, I look forward to how the monkeys will unite Australians around barbecue with lamb.

“Another special campaign that captures a cultural moment and pokes fun at this crazy pandemic. The intriguing stories are multi-layered with every engagement you can pick up on a fun detail you may have missed.

“Importantly, the Australia Day story is diverse with a realistic cast and the lamb product is the hero. Sam helps glue the campaigns together over the years and I just crave a lamb chop every time I see the campaign.

Do you have anything to say about this? Share your opinions in the comments section below. Or if you have any news or tips, email us at [email protected]